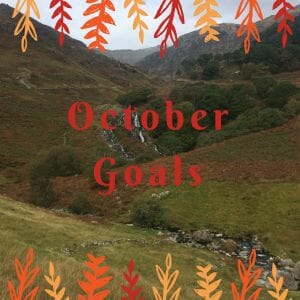 Goals.  Goals, goals goals… Why do I set them? Do I achieve more in the months that I set proper goals than I do in the months that I don’t?  Yes, yes I do.  Granted, I’ve not done any empirical research to back up this assertion, so perhaps I should say “I think I do” or “I’m pretty sure I do“, but to be honest, I don’t really care.  I’m a listaholic and I like little more than to tick things off lists.  Goals are REALLY up my street, so let’s crack on with the goals for this month.

I really, really want to get the website finished this month, however I’ve not idea how long that’s going to take, and I want this to be a measurable goal. I need to spend some time taking some more photographs (one day I’ll get some professionally done but until then, it’s diy all the way baby…)  I also need to move the blog over to the new website, but I’m hoping my other half can do that – there has to be some perks to being married to an IT professional eh? So, I’m going to commit to working on the website for at least eight hours this month – that’s a measurable goal that I think is achievable, so we’ll see how close to launch that takes us.

It’s Blogtober don’t you know?! There will be 31 more posts on the blog at the end of the month than there was at the beginning of the month.  That’s a goal and a half I reckon!!

Make a Lotion or Cream.

Back in August, I was honoured to be gifted an amazing book on making skin care – Luscious Lotions, Decadent Creams & Nourishing Conditioners: 30 Emulsified Lotion Recipes and Detailed Instructions.  The giver was none other than the author herself, Lisa of Aquarian Soap, and I’ve been itching to try something out of the book since I received it. So, this month I’ll be making at least one recipe out of Lisa’s book and of course, sharing the results in a post.

So there we go. Three main goals.  I also need to make more Christmas soaps, wrap and label a shed load of Christmas soaps, keep up with regular soap restocks, design and make up a selection of gift sets and make LOTS of bath bombs.  Throw into the mix a Craft Show that I’m organising in my village for Saturday 21st October and it’s probably a good thing that I like being busy 😀

Oh, and one little one personal one for the road – I want, need, to get back into running. So, despite the fact that I’ve not run a single metre for a couple of months, I’m planning on running 50km this month (shoot me now).