Tonight’s planned blog post was supposed to be all about soap for our four legged friends – it seemed appropriate after yesterday’s post about Jac the Crazy Collie. However things don’t always go to plan and now I find myself at 9.30pm having just finished work and with absolutely nothing prepared for today’s post…

Let me tell you why.

Last week I made lots and lots – hundreds! – of solid conditioner bars for a wholesale order.

Although I can only make 100 at a time (yes, I really do need to get additional moulds) I knew how long I needed to get them all made and I was organised and in control – or so I thought. What I didn’t count on was delays at the printers. My plan was to pick up the labels on Friday, box and label all the conditioner bars over the weekend (breaking my no weekend working rule AGAIN), and then deliver the whole lot on Monday.

Unfortunately the labels were overlooked on Friday but I was assured they’d be printed on Monday. I’d already told my customer that I’d be delivering them on Monday, so I had to email over the weekend and explain the delay. But somehow the printing got overlooked again on Monday – Dean turned up to collect them late Monday PM and YIKES they still weren’t done. Luckily I’d given myself a little bit of wriggle room with the new delivery time – late Tues pm or Wed am, I’d said – so when I finally got my hands on the labels at 5.30pm today I headed straight over to the office to get to work. Four hours later I’m finished and all boxed up and ready for delivery tomorrow morning:

So there you go. Sometimes mistakes happen, and things go awry, but at least it gave me something quick to write about this evening 😀

Click here to check out The Soap Mine range of solid conditioners for yourself.

Now I’m off to have something to eat and sit down and enjoy The Great British Bake Off a bit later than planned. Thanks for reading – back tomorrow.

My number one bestselling soap is Eryri, the landscape soap:

I’m pretty rubbish with technology, but I’ve been asked so many times to record some videos of my soapmaking I thought I ought to give it a go, and this video shows me pouring and sculpting Eryri. Some people use scrapers to ensure that all the bars are uniform in design, but I sculpt my layers freehand, so no two bars are ever the same. I like them that way 😉

I always make this in batches of six loaves (90 bars), but you only see five in the video – the sixth was just out of shot.

I don’t think there’s much else to say about this one, but if you have any questions just pop them in the comments below and I’ll respond asap.

Thanks for reading (and watching). I’ll be back tomorrow with Day 11. 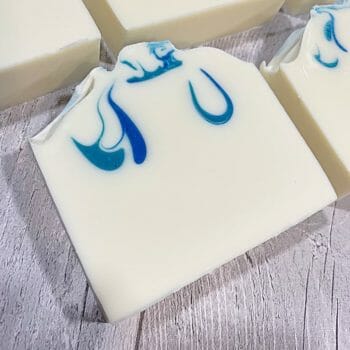 A quick and easy post today in the shape of the cut of Serenity made on Monday – 120 bars cut on my ancient single string soap cutter! It’s quite a so process and I’m getting very close to ordering a fancy-pants multi-string cutter – yey! (Maybe it’ll be here before the end of the month so I’ve got another easy blog post 😉 )

So anyway here they are, some quick snaps of Serenity taken today, literally seconds after they were cut from the loaf:

I love how there’s never, ever, two identical bars. These particular ones have now been put down for their 6 week nap, but there’s plenty available on the website – get yours here.

Thanks for reading, almost a quarter of the way there now! Back tomorrow with Day 8

Some of you may know that back in June I had an operation on both of my feet to correct bunions and to treat advanced cartilage deterioration caused by arthritis. I’d been on the waiting list for nearly 4 years, and had suffered daily pain for far longer than that, so when the hospital called asking whether I would be willing to be admitted for surgery within a fortnight, I didn’t have to think about it for too long.

Anyway, to cut a long story short, the surgery went ahead as planned on Wednesday 23rd June. The affected joints in my big toes were broken and had steel rods inserted to fuse the the joints. It was a day case under general anaesthetic and I was given special shoes to get me back on my feet straight afterwards but I had to make judicious use of painkillers and rest for long periods of time afterwards. I spent the whole of the unusually great weather during July (and my birthday!) in plaster casts, but they eventually came off on the 2nd August and rehabilitation began in earnest.

Which brings me to the point of this post. Prior to the surgery I walked a lot. I averaged 17,000 steps a day, but 22,000 wasn’t unusual. Obviously this dropped right down post-op, but as the weeks go by I’ve slowly been increasing my activity and this week, for the very first time, I managed to walk over 10,000 steps EVERY DAY! This is a massive milestone for me, and worth a blog post dontcha think? 😉

Thanks for reading – back tomorrow 🙂